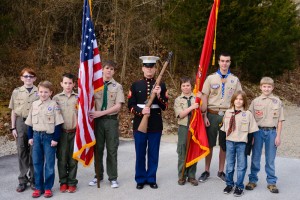 The Arnold Rifle and Pistol club recently presented a Springfield M1 Garand rifle to Sergeant Joshua S. Barrett, USMC (Retired), a combat wounded veteran of the conflicts in Iraq and Afghanistan as part of the M1 for Vets program. This marks the first of what we hope will be many such presentations held at our club, and the first handled entirely by the ARPC.
While the ARPC has hosted several prior M1 for Vets presentations, those rifles were purchased by the Gateway Civil Liberties Alliance and presented by representatives of the Owensville Gun Club, the primary coordinators of the program in Missouri. This time the ARPC handled all aspects of the presentation, coordinated by Public Relations Officer Jim Dickerson. The beautifully restored Garand was purchased through the Civilian Marksmanship Program and the ceremony was planned and presented by our club, immediately prior to the March CMP Match. Boy Scouts from Troop 406 in Hillsboro, MO handled the Presentation and Posting of Colors, and ARPC Executive Officer Dale Yankey impressed the crowd of 70-plus with his performance of our National Anthem. Our newsletter printer, Trio Graphics of Arnold, printed a color program at no charge to support the effort. As Master of Ceremonies, ARPC President Dave Davenport presented the biography of Sgt. Barrett’s three tours of duty overseas. 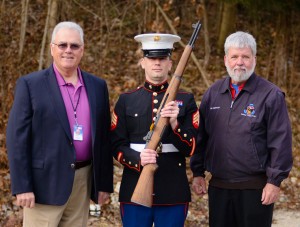 Sgt. Barrett was recommended to receive this honor by representatives of the Disabled American Veterans working with the Veterans Administration St. Louis offices. He was deployed twice to Iraq, and once to Afghanistan. As a Combat Engineer in Iraq, he was involved in clearing and holding roads and communities, as well as setting up and securing election sites for the first free elections for Iraqis. His unit was also involved in clearing IEDs, building forward operating bases, holding them until infantry and mechanized units could move into the area. He also trained Iraqi Army and Iraqi police in basic counter IED tactics and clearance.
In his third tour of duty, this time to the Helmand province of Afghanistan, Joshua served as Company Gunnery Sergeant, arranging convoys, helicopter resupply missions, known as “beans, bullets and bandages” to over 200 Marines deployed throughout five different forward operating bases in the most deadly province in Afghanistan. In this role he was responsible for arranging security operations for their compound and tasking all Marines throughout the theatre of operation to designated locations to support ground offensive and setup of temporary Landing Zones to support helicopter assault and support missions. Of specific interest to our members, Sgt. Barrett taught enhanced marksmanship techniques and designated marksmanship to Afghanistan Army.
Sgt. Barrett was operating in and around the notorious Iraqi city of Fallujah during his first deployment when, while erecting a blast shield to fortify a position, an RPG round detonated next to him and he suffered a traumatic brain injury (TBI). Despite pressing on to serve two more deployments, this injury continued to take its toll, and he is now retired with a 100% disability from TBI and Post Traumatic Stress Disorder.
Joshua now resides near Farmington, MO with his wife of ten years, Lauren, and their children, Tristan(8), Gavin(6) and Brayden (3). 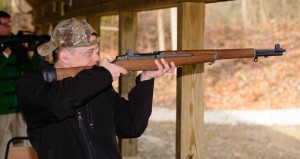 After Dave’s remarks, Jim had the honor of presenting the rifle to Sgt. Barrett. After posing for a few photos, it was time to get down to business. Trading his dress blues for more suitable attire for laying on the ground, Joshua got some trigger time on his new rifle. ARPC members who are regular participants in the CMP matches made sure Joshua had everything he needed, including enough ammunition to shoot the match with more leftover to take home.
If quality rifles are available from the CMP, plans are for our club to hold these ceremonies on a quarterly basis. There were many in attendance who commented on what a moving ceremony it was, and how glad they were to take time out of their Saturday morning to attend. While getting a crowd for just about anything at our club is always a task, it is hoped that we can have an even larger audience to support this program and honor a deserving veteran the next time this happens.

NOTE: It is hoped that this will be prior to the regular CMP Match on June 20, but watch for announcements because as noted, we have not yet been able to procure the rifle from CMP.